Observations on the Natural History of Bats in the Yukon

Until recently, bats have not been well surveyed or studied in the Yukon. The little brown bat was known to range north to Mayo and Dawson City in the summer, but little was known of its biology or natural history, or if other species occurred. In this article we report from studies conducted between 1997 and 2008, funded in part by the Northern Research Institute. Current studies are answering questions about bat species that occur in the Yukon, their daily and seasonal activity patterns, foraging and roosting habitats, and population dynamics within roosts and roosting areas. We studied bats by detecting and interpreting ultrasonic echolocation calls (acoustic surveys) and by live capture. Acoustic surveys were conducted at over 100 sites across the little brown bat’s range in the Yukon, where over 7,000 bat passes were recorded. Most of them were little brown bats but we also recorded northern long-eared and big brown or silver-haired bats. We have banded 1,043 little brown bats at twelve maternity colonies in buildings, bat houses, and rock crevices. Locations of hibernating sites remain unknown, but the bat species that occur in the Yukon are migratory and may hibernate a great distance from their summer range. The annual timing of birth of the little brown bat in the Yukon, at the northern edge of their range, is typical for the species. Recaptures of banded bats has documented roost fidelity and the use of multiple roosts within a larger foraging area. We have also documented cohesive movements of colonies during roost switching, long distance dispersal to new roosts, and survival for at least twelve years. Further research is needed to address the substantial gaps in our knowledge about bats in the Yukon.

Brian Slough is an independent wildlilfe consultant and researcher who has been studying bats in the Yukon for twelve years.

Thomas Jung is senior wildlife biologist with Environment Yukon and has an interest in rare or elusive species including bats. 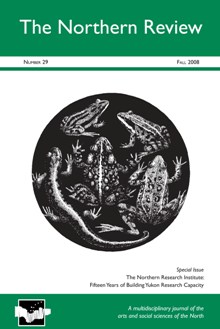